The History of the Gingerbread Man 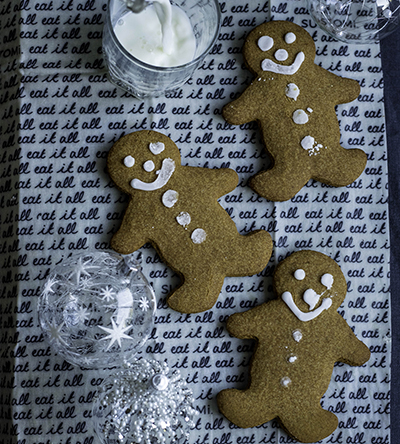 The History of the Gingerbread Man

Run, run, fast as you can,
You can’t catch me, I’m the gingerbread man!

~ The Gingerbread Man, a fairy tale

No biscuit symbolises the holiday season quite like the gingerbread in its many forms. The origins of the gingerbread man is interesting. Since ancient times, ginger has been flavouring food and drinks and the gingerbread man descends from Medieval Europrean culinary traditions and ginger cookies were prominent on Northern European Christmas tables. The word gingerbread was derived from the Old French word which meant 'preserved ginger'. During the Middle Ages, ginger was favoured as a spice for its ability to disguise the taste of preserved meats.

Ever wondered why ‘gingerbread men’ are shaped like men in the first place? Firstly, it is understood during Queen Elizabeth I’s 16th century reign, elaborate royal dinners were hosted and the Queen’s retinue also included a royal gingerbread maker who made gingerbread men to represent foreign dignitaries and people in her court.

Also, during this time period, gingerbread men were believed by old folk medicine practitioners as love tokens for young women. If they could get the man of their choice to eat the gingerbread man that had been made for them, the idea was that the man would then fall in love with the young lady.

So on that note, here is a gluten free gingerbread man recipe or alternatively, our Gluten Free Gingerbread Men (4 pack) are available from Choices Gluten Free Online Bakery. Season’s Greetings!

Melt Margarine, sugar and golden syrup in saucepan over a low heat until all sugar has dissolved.

Place all flours and ginger in to large bowl. Whisk replacer into cooled margarine mix and then pour into flour mix until combined.

Place dough on a floured surface and knead until light and smooth. Refrigerate for 30 minutes or until cooled.

Roll out dough on floured surface at ½ cm thickness using cutters you can cut gingerbread people. Cook for 8-10 minutes

After the gluten free gingerbread men have cooled, you can decorate then with icing, gluten free lollies and sprinkles.